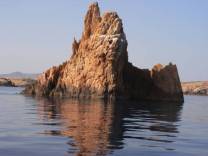 The Cyclades are a set of pristine islands located in the center of the Aegean Sea, Greece.

Best dive-season / How to get there: Although several of the islands can be reached by local and international airplanes, one of the preferred ways to arrive at these idyllic islands is by sailboat or chartered yacht. There are plenty of boats and trips to be booked between the harbor of Piraeus, Athens and Heraklion, Crete passing the Cyclades on the way.

The Cyclades are a collection of more than 200 islands located in between Athens and Crete, right in the center of the Aegean Sea. Some of the more visited islands are Andros, Naxos, Paros, Mykonos, Ios and Santorini. Although some can get crowded in summer, most islands offer picturesque villages where life has kept its slow pace. You can find blue-colored houses, white windmills, narrow streets, traditional markets, donkey-rides and churches and chapels on every street.

Mykonos (Myconos) is a world renowned cosmopolitan island known by partiers across the world for its superb nightlife, exclusive clubs and progressive views to nudism, gay and transvestites. Paros and Antiparos offer touristic towns such as Parikia and Naoussa with famous beaches such as Golden Beach. Santorini or Thera is one of the most southern islands of the Cyclades Island Group known for its geological variety resulting in volcanic black, white, golden and red beaches. Other islands well worth a visit are Amorgos, Milos, Syros, Sifnos, Folegandros and Serifos.

With this many islands, divers are treated with plenty of pretty coves, beautiful bays and crystal clear waters. Its marine life is diverse from turtles to pelagic species and from nudibranchs to parrotfish. There are several wrecks, located on bright sand, creating the perfect conditions for photography. Its rocky underwater landscape offers plenty of caves, caverns, swimmthroughs and holes scuba divers can investigate. This paradise is blessed with sunny bays, white golden beaches and stunning underwater scenery creating one of the best scuba dive destinations in the Mediterranean.

The Cyclades is a group of 39 Islands of which 24 are inhabited. Located a short journey south of Athens, they have long been a popular destination for tourists both above and below the water.

Some of the main Islands in The Cyclades:
Santorini: Always a popular destination with tourists. Set on a hill the main town is featured in most of the postcards showing 'traditional' Greek houses of blue and white.
Naxos: The largest of the Islands, and is increasing in popularity due to it's astounding rock formations, fertile valleys and one of the best beaches in the Cyclades.
Amorgos: Most famous for the filming of the free-diving film 'The Big Blue'. There is also an ancient monastery clinging to the cliff face, which is always worth a visit.
Paros: The main hub for ferries from Piraeus, making one of the most popular destinations of all the Greek Islands. It also produced the marble used for 'The Venus de Milo'.
Antiparos: The inland cave at the centre of the Island still has visible markings from early visitors dating back to 1673. Its other famous cave is the underwater one, in a small Island towards the south of Antiparos.
Mykonos: Renowned for its nightlife and cosmopolitan attitude towards 24 hour partying and the types of people that partake in it.
Syros: The capital of the Cyclades, with a population of over 150,000. Has mountainous regions to the north and rich fertile land to the south.